Grade: Δ — (Delta) A good solid read, but only buy it if you like the genre. 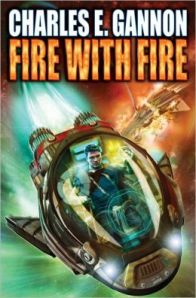 Set in the Early 22nd Century, in a post-FTL world that uses a shift-drive (jump drive by any other name) with a reach of no more than 8.5 light years (appx 2.6 parsecs, 537,181 au, or 80,361,167,122,000 km) of distance.  All of explored space is within the relatively local neighborhood.  The story starts with Cain Riordan sent on a mission to determine if first contact with an alien species has been made… or is it?

Fire with Fire is the new by Charles E. Gannon that combines spy-thriller and Space Opera genres, with a very solid potential to also incorporate Military Science Fiction in future volumes.  Of course, whenever one chooses to combine genres, one is often forced to choose which one it falls most into.  In this case Fire with Fire definitely falls more solidly into the Science Fiction format than the Espionage one, with good tradecraft sacrificed in favor of a more action packed read.  To that end, it’s more of an Ian Fleming/James Bond story than a John LeCarré/George Smiley kind of a tale.

Having said that, this is definitely not just a shoot-em-up action tale.  There is a definite thoughtful element to it, and while the villains are clearly villainous, there are layers within the tale and questions as to who is pulling whose strings.  While this seems resolved at the end of the book, enough questions remain to make me anxious to see the next installment.  To that end, I would not say this is a stand alone book, but rather is the set up for what promises to be an interesting series.  Indeed, I tangentially classified this as Military Science Fiction because at the end of this book it is clear that a war may be coming[2] and I suspect that some of the future volumes will focus on that war (or attempts to avoid it), albeit from an espionage and diplomatic angle.[3]

I cannot, unfortunately, go into too much detail about the plot itself since there are small reveals throughout and finding them is half the fun of the novel.  Leave it to say that the story begins with a straight forward mission that quickly escalates beyond expectations.

As for the writing and structure of the book, well, that is where I have a bit of a problem.  While the writing is clean and interesting, there is a bit of a structural problem that occurs early on in the novel.  The volume is divided into two ‘books,’ (Book One: Contact, Book Two: Convocation.  Both contained in the same eBook), the first of which is four Parts (Prologue, Part One, Part Two, Part Three), the second into two Parts (Part Four, Part Five).  This, by itself is perfectly fine and probably even a good thing. There are, however, a few awkward places where information is withheld from the reader in order to build tension. 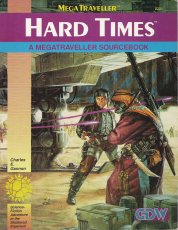 The most obvious of these lies at the end of the first mission where there is a sudden and jarring flash-forward in the action.  Indeed, I had to turn back the pages three times to make sure that I hadn’t found a glitch in my e-copy of the book.  I had not.  The scene suddenly shifts from a planet surface where Cain is finding critical information to his mission, to a space ship after he has found it and struggling to deliver it to those who can put the intel into effect. Both scenes are exciting, but the cut was quite jarring and left me thinking, “Wait?  Is that it?  Surely there’s something more here?”

We later find out through flash-back that he did gather additional intelligence, and delaying that reveal makes the scene in which he discusses it much more appealing.  Even so, it was quite a jarring scene shift that pulled me out of the story and left me aware of the story telling mechanics.  Other instances are far more deftly handled, but once encountered one is always on the look out for the word-smithing.

I also wonder at times if the hero was a bit too… perfect.  He is described as a polymath, and that is good, but he seems to master things a wee bit too easily; after all, the phrase jack-of-all-trades and master of none was coined for a reason.[4]  Having said this, however, I will note that in one sense it is a bit of a relief to read a character who is, well, just heroic, for a change.

What is more, the conclusion of the book shows a really strong talent in the author.  I won’t go into any details, but let us just say that Gannon avoids the cliché gun combat at the end of the story,[5] but the scene he includes holds as much tension as any war scene I’ve read and yet there is not a single weapon drawn in the whole thing.

To this end, this shows an author with real promise.  If Gannon can write meeting scenes with as much tension as he shows throughout this novel, we are in for a very good series indeed.  In fact, despite the fairly clear setup he has written, I was left wondering if everything was really quite what it seemed… and THAT is the key to a very good spy tale indeed.  To that end, I suspect that this book may well be the opening salvo in a series that has Alpha… or perhaps more likely Omega potential.

[1] Charles E. Gannon has contributed to two other Baen Books, Starfire Series: Extremis (with Steve White), and Ring of Fire Series: 1635 Papal Stakes (with Eric Flint).  He was also the author of the MegaTraveller Source Book, Hard Times, which was a great addition to the game and where I first came across his work.  He is s a Distinguished Professor of English at St. Bonaventure University, and also serves as part of the Sigma think tank.

[3] This raises a question: are novels about war that don’t focus on front line combatants classified as Military Science fiction?  While they probably should be, they usually are not.  Even this book is not what one would define as classic MilFic, and yet it is very clearly about the build up to a conflict.  It is possible that conflict will be averted, in which case the series won’t be shelved as a Milfic series, and yet, it really is.  Alas, I see that I must address this in another Problems with Military Science Fiction article.  Sigh….

[4] Or as my grandfather put it: Jack-Of-All-Trades and Master-of-Arts.  Hee… hee… hee…