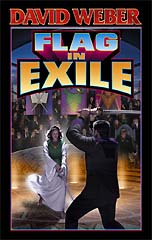 Grade: Δ — (Delta) A solid read, but only buy it if you like the genre.

Flag in Exile is David Weber’s fifth book in his long lived Honor Harrington series and focuses on the ramifications of her actions at the end of the last book.  It simultaneously builds more of the political and social background of the ‘Honorverse.’  While there are significant personal and political events that occur in this story, this novel also manages to return to the realm of space combat that is the heart and soul of this series.  To that end, it is an enjoyable read to anyone who likes the Honor Harrington series, but would likely prove unsatisfying to anyone who was not already a fan of Weber’s principal universe. 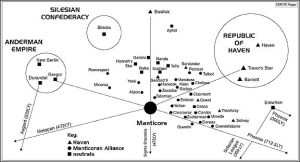 A Far Future interstellar space, where Faster-Than-Light travel is possible through hyperspace and wormholes.  Earth exists, but is little more than historic footnote, with the main storylines occurring on independent interstellar states primarily populated by the descendents of human colonists.  The prime backdrop is clearly (and unabashedly) based on a futurized version of the Napoleonic era Naval combat. 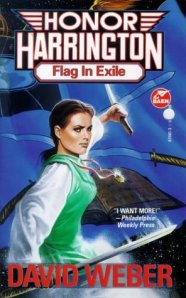 I am somewhat mixed in my feelings about this book.  In one sense it builds quite nicely on to the end of the previous novel, showing both the personal and political impacts of the events in that book.  To that end, it is quite rewarding.

In another sense, however, it adds even more skills and talents to Honor’s tab that continue her along the path of a person who is just-too-good-to-be-true.  She is not just a polymath, skilled at many things, she is an expert at everything she turns her hand to.  Where she does have weaknesses they never really make much of a difference[1] or are, in fact, strengths that are thinly veiled as weaknesses.  Furthermore, by this time in the series, I already had my doubts about her ability to ever fail – or even just not succeed – at whatever she puts her hand to. 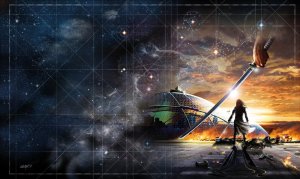 Having said that, in this volume Honor has suffered loss prior to this book, and faces new challenges that are worthy of her status.  To that end, the story definitely kept my attention and made for an enjoyable read.

The book opens with her facing the professional and political ramifications of her choices in the last book while also addressing, or attempting to address, the emotional and psychological outcomes. She is depressed and been removed from active duty from her beloved Manticorean Navy.  What makes it worse is that at long last the Star Kingdom has returned to hostilities with the Peeps (People’s Republic of Haven) and a full bore space war has begun.

Facing exile at the precise moment her people need her most, Honor turns to her responsibilities in the allied nation of Grayson.  Taking up her post as the first woman ‘steadholder’[2] that this religious and sexist nation has had, she faces a wide range of political and social battles.  Additionally, she is quickly made the number two person of the Grayson Navy, bumping her from the rank of Captain to that of Admiral (albeit in a foreign but allied navy). 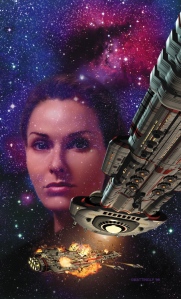 This leads to a good deal of political maneuvering, and even more discussions, debate and involvement in the nature of Fleet logistics and deployment.  For any fan of Military history, this makes for interesting reading (and puts it full form into the school of Tales of Tactics rather than Soldier’s Story), but others may not be so readily engaged.  Fortunately, this political and logistical wrangling is nicely balanced with both personal and naval combat and the end of the book.

So in the end, I enjoyed the book a good deal, but really cannot imagine anyone who did not already like the Honorverse getting any enjoyment out of it.  Though it was by no means the best book in the series to date, it was a solid contribution that built up the world and the personal history of Honor Harrington, while setting the readers up for what promises to be better books to come.

The Brilliance Audio production of Field of Dishonor was extremely well done, with Allysson Johnson again proving herself as the perfect narrator for this series.

Johnson continues to have a way of reading Honor’s high pitched voice as being commanding, though her accents are a bit strained at time if they are supposed to represent real world ones.  Even so, I could over look that as that it is supposed to be taking place in the future and could well just be read as being representative of future dialects.  Besides, she uses them consistently (thus a Sphynxian accent always sounds the same, Grayson accents always sound Graysonian).

[1] For example: she is famously “not very good at math.”  This is a failing that one might expect to see having some significant impact on a person who is involved navigational exercises. However, at this stage in her career, five books in, we have yet to see this play at all into any plot line.  It’s a bit like having Superman inhabit a world without kryptonite.