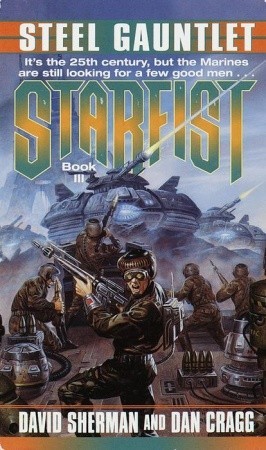 Grade: Δ — (Delta) A solid read, but only buy it if you like the genre.

Steel Gauntlet: StarFist Book III, is Sherman and Cragg‘s third Military Science fiction outing into the StarFist Universe, and this time the focus is on the relative merits of infantry versus armored warfare.  It is a fun read for MilFic fans, with a particular appeal for tech heads and a strong continuation of character building, but much of the plot relies upon technical predictions by the authors that now seem somewhat dated.  I enjoyed it both when I first picked it up, and now years later, but if you don’t like MilFic or Sci-Fi, however, it is not likely to appeal.

It’s the 25th Century, but the Marines are still looking for a few good men…

With a tag line like that, what more do you really need to know? The Starfist series follows the adventures of the 34th FIST (Fleet Initial Strike Team) Marines as they fight to defend the Confederation of worlds set around Earth. While the Confederation is the largest union of planets, it is not the only human government in the region, and as the series progresses, it becomes clear that other species are also lurking out their in the stars.  FTL and intelligent aliens are part of the mix. 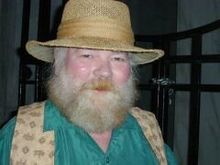 One of the advantages of this series is that you really don’t have to have read all the books to pick up any one in the series and enjoy it. Oh, there are some must reads if you follow the series, but for the most part, you can pick it up anywhere along the way and have a good rollicking fun time.  That is certainly the case with this book.

The premise of Steel Gauntlet is that a wealthy industrialist takes over a planet using a series of advanced tanks.  To combat this coup, the Confederation sends in the 34th FIST armed with nothing more than LAWs[1] and, of course, their own skill and cunning.

This makes for an action packed book in which we get to see some of the comparative merits of the fire power of armored units against the speed and agility of fast moving infantry.  Of course, considering the backgrounds of the two authors, it’s not hard to guess what side they will come down on, but even so, this book shows a great series of fights between powerful futurist tanks and well trained Marines armed with shoulder mounted tank killers. 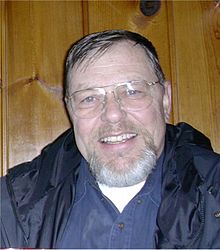 Having said this, much of the plot mechanics of the book relies on the authors’ predictions as to the advancement of armored warfare, and ten years down the road, those predictions seem quite dated.  Lack of UAVs and a very linear, Vietnam era approach to developments in armored units did not really hold water even when the book was first published.  Now, it does stretch one’s ability to stretch one’s disbelief.

Even so, to the author’s credits, they Marines come across a far harder fight than their planners led them to believe, and the action is touch and go for much of the book. Indeed, the hard core nature of the fight does make this a bit of a rip-roaring adventure.  So, if you want a bit of fun action that advances the storyline of some great MilFic Marines, this is a good read, but if you are not a fan of the series, you might want to miss this one.  There are plenty of good action adventure tales in the StarFist series.