Call for the Dead was the debut novel of David Cornwall, the former British Intelligence Officer better known as the now famous spy novelist, John LeCarré.  Not only did this story launch the career of the best (in my not so humble opinion) espionage author to date, but it also initiated the world of George Smiley. To that end, it really is a must read for any LeCarré fan, or indeed anyone who likes mystery or espionage tales.  In fact, I suspect that it could well be enjoyed even by those who generally dislike mysteries or spy novels. 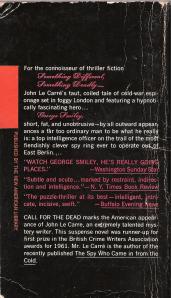 I was first introduced to this book by my father, who handed it to me after I had so clearly enjoyed Tinker, Tailor, Soldier, Spy.  He had clearly also enjoyed it, as that he had an original paperback version as well as a 1966 copy of the fifth reprint entitled The Deadly Affair.[1] Though it is not LeCarré best book, that says more about the high quality of his works in general than criticizes this novel.  Call for the Dead is a wonderful espionage mystery that sets the stage for the rest of LeCarré’s career.

The story is quite short and brilliantly crafted, creating deep character studies while also weaving out a brilliant and complex mystery, all in a mere 128 pages.  It opens by introducing us to one of my favorite characters in literature, George Smiley: a middle aged, overweight and apparently unremarkable man, who has a keen mind, marvelous memory, and brilliantly methodical form of inductive and deductive reasoning which is the trademark of his tradecraft.

The story begins after a more or less congenial investigation of Samuel Fennan, a well placed man in the Foreign Office.  Smiley is told the man committed suicide because of the dreadful stress the interview put him under.  This makes no sense to Smiley, who as good as told Fennan there was nothing to worry about.  As a result, Smiley begins his own investigation into the man’s death, and from there… well, a brilliant, complex and yet still succinct story unfolds. 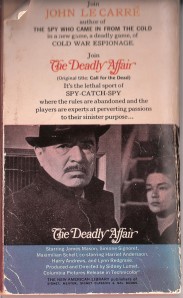 What is amazing about this tale is that this one short book not only introduces us to the wonderful overweight and middle aged genius that is George Smiley, it also opens the door to a myriad of characters, institutions, themes and plots that are trademark to John LeCarré’s Cold War novels. In Call for the Dead we meet Smiley’s philandering wife Lady Anne, his loyal colleague Peter Guilliam,[2] his friend Inspector Medel (later known just as Mendel), the mediocre bureaucrat Maston, and the deadly Mundt; all of whom enter various other volumes in the George Smiley canon.

What is more, we see many of the elements that become clear archetypes of LeCarré’s themes.  We see Smiley’s struggle with the morality of his occupation, the change in the clarity of his mission in the transition between the WWII and the Cold War, and his on-again-off-again relationship with both his wife, Lady Anne Sercomb, and his agency, known (always) as the Circus. 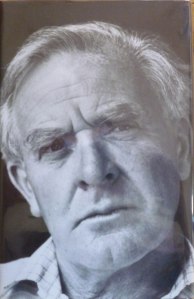 In fact, the literary correlation between his relationship with Anne and that of the Circus is perhaps most clearly, and artfully, portrayed in this novel.  Smiley’s shabby treatment at the hands of his wife and his employer, as well as his undeniable infatuation with both, is beautifully illustrated in this book.  There is one scene involving a statuette that captures it better than any description in any of the subsequent Smiley novels.

Also in this tale is a story element which long time readers of LeCarré will immediately recognize: the dubious and guilt ridden relationship between a British Intelligence Officer and a German (or at least Germanic) agent.  For in Call for the Dead we see a character introduced who is reminiscent of Otto Lipsig (Smiley’s People), Axel (The Perfect Spy), and Sasha (Absolute Friends).  Though each character is clearly his own being, there are elements of all of them telegraphed in LeCarré’s first novel.[3]  It makes one wonder what guilt the author carries from his own days in ‘the service.’ 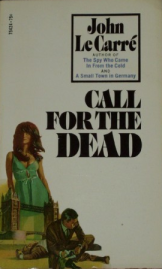 Sometimes, I just have to comment on covers… and this one is pretty funny. There is nothing in this image that clearly relates to the story, not the woman, the man or tower bridge.

Yet despite all of these elements that will no doubt appeal to any fan of LeCarré, what is perhaps best about this story is the succinct manner in which it is told.  It is short, to the point, and holds a vast amount of both literary skill in its 128 pages.  To that end, while it is a must read to any fan of mysteries or spy novels, I would also highly recommend it to those who might otherwise not like the genres.

While not my favorite LeCarré novel,[4] it is certainly in the top five, and probably in my top ten mysteries of all time.  Read it or listen to it and see why.

Ah… Michael Jayston.  I go into great depth (i.e. wax rhapsodic) about his skills and talent in my review of The Prefect Spy (http://wp.me/pWa2h-pI), so I will keep it brief here by noting that this is one of his better works.

Indeed, in some ways this 1991 reading reflects a moment when he really makes Smiley his own.  While Smiley is eternally middle aged verging on retirement through most of LeCarré’s books,[5] here Jayston manages to show a somehow younger-but-still-middle aged Smiley.  As a result, while his readings of Smiley ala The Karla Trilogy seem inspired by Alec Guinness (with whom he appeared in the BBC version of Tinker, Tailor, Soldier, Spy), here Jayston shows a version of Smiley that is more his own and yet one that holds continuity with his other readings.  Such readings takes remarkable skill, and even though I have read the story multiple times, I thoroughly enjoyed Jayston’s reading.

[1] Also titled The Deadly Affair for its Fifth reprint, when in 1966 it was made into a movie starring James Mason (of all people) in the George Smiley role. Smiley was, however, renamed Charles Dobbs in the film (not the reprint), since the character name under license for the making of the film version of The Spy Who Came In From the Cold.

[2] At this point in the LeCarré canon, Guilliam seems more of a peer.  It is not until much later that we begin to see him as one of Smiley’s mentees.  Indeed, the vague rewriting of various character histories through the growth and development of the Smiley series is fairly standard.  While there is no (or at least few) blatant continuity violations, the exact details and implications of numerous characters histories alters, or perhaps is refined, quite often.

[3] Indeed, one might suspect that my own long time history with this novel might be to blame for my lack of enthusiasm for The Perfect Spy, that many consider his finest work.

[4] That would be Tinker, Tailor, Soldier, Spy, in case you were wondering.

[5] Indeed, how he could have been verging on retirement in 1961 and still doing so in 1979, and still active in some form in 1990 is one of the stretches one has to accept if one reads Smiley.  Since, however, dates are not given save only in this novel, The Honourable Schoolboy and implied in The Secret Pilgrim, it is relatively easy to ignore.