Grade: Ε — Readable in genre, but you could probably do better. 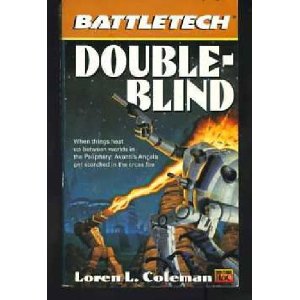 Double Blind: Battletech 31 by Loren L. Coleman is a mediocre MilFic book that serves as a tie-in to the Battletech game system.  It has a poor start that it nearly got the rare Ζ – How did this get published rating.  It eventually picked up, however, and becomes a reasonable story that could have had a great deal of potential, if only it had been handled better.

Why did I read book thirty-one of an infinitely long series?  Well, I had a copy, and to be honest with you, I was always intrigued by the Battletech universe.  Ever since I watched Gigantor as a kid, I’ve loved robots, and the idea of giant robot tanks running around a battlefield is just cool.  What is more, I knew that the Battletech universe was governed by complex politics, so I thought it could have potential to be an interesting book.  I was right, but sadly, the book didn’t live up to that potential.

The novel began with a brief prologue, which served its purpose quite well.  It was then followed by a nine and a half minute (I listened to the audio book version, but estimations suggest it would have been approximately eighteen and a half (yes that’s 18.5) pages) section which consisted almost entirely of info dump — not about the technology mind you, but about the politics — set in a meeting of characters who were clearly (and I do mean clearly) intended to be the bad guys.

This was then followed by a battle scene where we are introduced to the principal protagonist commanding his giant walking robot tank squadron.  So I was prepared for cool combat scene with a fair amount of technobabble and a lot of action.  Unfortunately what I got was another giant info-dump punctuated by descriptions of combat which lost all their vitality due to the long drawn out description of the history of the mercenary unit our protagonist commands.  This time, the dump did not even have the benefit of being done in dialogue; nope, just long drawn out bits of text which describe events that turn out to be completely superfluous to the story.  Said giant historic document was occasionally broken up by sub-standard bits of combat in which we were not even given a description of what the mechs (that is giant robot tanks) look like, and which were so dispersed through the chapter that I had forgotten about what was going on in the battle and had to go back and re-listen to it.

The second info-dump chapter lasted for eight-and-a-half minutes (estimated 16.5 pages).  That put us about 20% of the way through the book before we even began to discuss the mission, learn who any of the principal characters are (other than the hero and villains… who mostly don’t re-enter the tale.  Wierd).

Now, I was taught that it is a golden rule that big, obvious info-dumps should always be avoided whenever possible.  In this case, there were a dozen different the same result could have been achieved. What made it worse, is that in both sections, but particularly the second one, the bulk of the information could easily have been summed up in two or three sentences, max.

Eventually, however, the story got going and it became a perfectly acceptable piece of Military Science Fiction that really had some potential. There was a solid world backdrop, ripe with political maneuvering, and there were decent characters.  Unfortunately, instead of letting us uncover the various betrayals and mysteries that our principal characters encounter as they encounter them, the author (Coleman), told us who the villains were right from the get go and so removed what could have been a really good point of tension from the tale.  We know exactly what is going on, and because of the nature of the tale, we kind of know that the good guys are going to get out okay.

This kind of “tell the reader everything” style of writing is quite common in MilFic these days, and I’m not sure why.  Lack of trust in the audience perhaps?

Either way, even the combat sequences in the book don’t quite cut it. As said earlier, the descriptions of what the mechs look like and how they are armed with are very few and far between. Indeed, there are no description of how one pilots/drives the things.  Really, I wanted to read this so I could get a sense of what it is like to ride one of these mechs, Instead, I get some descriptions of battlefield dispositions and that weapons are fired, but that’s it.  It’s a bit like picking up a sword and sorcery novel and being met with “He cast a spell and it killed the orc.”

Really, if you’re going to write a book about stuff that’s cool enough that someone builds one instead of improving their house, don’t you think you should describe it in the book?

The end result: I was far from impressed.  I spent the first third-to-half of the book thinking I would give this a Zeta rating.  While it did scrape its way up from oblivion, I still think you could do a lot better.

This was, beyond a doubt, one of the worst audiobooks I have ever heard. I don’t mean the text, which as you probably gathered I was non-too-impressed by.  No, no, I mean the production itself.

It wasn’t the narrator, Christopher Grabill, who was the problem.  Grabill did an adequate job in reading the text presented to him, though his villains were a bit too villainous and some of his voices came off as a bit… well… shall we say stereotyped?  Orientals sounded a wee bit too insclutable fah my riking[1] and don’t get me started on the Arabs.[2] Still, other than all in all, he did a good enough job, considering the script he was given.

No, what slaughtered this audiobook was the completely pointless use of sound effects and incidental music throughout the book.  By now, followers of this blog know that I’m not a big fan of sound effects or incidental music in audio books (unless they are dramatizations, but that is another thing all together).  I believe that producers of narrated texts should let the author and the narrator do the job!

In Double Blind, however, the production team hit a new low.  Not only are there special effect noises used throughout, but during the combat scenes, the sound effects are so loud they drowned out the narrator.  Half the time I couldn’t tell what the hell was going on.  Combat scenes need concentration when you are listening to them.  You need to hear the descriptions.  In this audiobook, however, that was…

… thing that it was never in doubt who would win each conflict.

Seriously.  We’d get the tension rising in a combat scene, people would open fire and you couldn’t tell what was happening do to all the background noise.  As a result, the book may be worth reading if there’s nothing else laying about, but I’d really look hard to find another audiobook before listening to this one.

[1] That is intended to be a comment about the narration, not about the way people fromEast Asia actually speak.

[2] Yes indeed, it is yet another book in which Arabs (or Arabesque cultures) are described as villainous and untrustworthy…