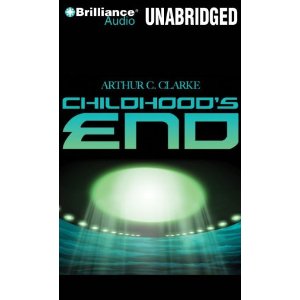 Grade: B — Fantastic book within the genre (in this case a classic), probably worth reading regardless of which genre’s you like, but has a setting or style that may not appeal to individuals who are not fans of a given genre. Also, to avoid bias, the highest grade I’ll give a book by someone I know and like.

In brief: Childhood’s End by Arthur C. Clark is an absolute classic. It was first published in 1953, but remains relatively un-dated in its presentation. Only the very beginning of the book is technologically dated, though its presentation of gender relations remains very 1950’s-ish (something Clark mostly overcame in later years). If one can ignore these aspects, it remains a remarkable book that sidesteps cliché’s in the genre before they had even become clichés. I highly recommend it to anyone who enjoys Science Fiction or wishes to see its development through time.

Setting: Earth, from the 1950’s (the present at time of writing) to the near future (21st Century)

In Depth: Every once in a while you can see why some authors are considered truly great. Childhood’s End is a perfect example of that. How many Science Fiction books do you know of that are over fifty years old and yet still grab and keep your interest throughout? Oh yes, there are elements that betray its origins: it begins with German scientists in the US and Soviet Union competing for a space race, and the role of women remains very much in the home (though for a story written between the ’40s and ’50s, women are portrayed in a vaguely progressive manner). Even so, the core storyline and the bulk of the telling are as poignant today as they were when they were written.

The storyline is simple, in one sense. It opens with the arrival of alien Overlords who force humanity to live in peace. The goals and indeed even the appearance of these beings remains a mystery through the majority of the book. This plotline may sound familiar, but what is amazing about the tale is how Clark managed to sidestep clichés (even before some of them were clichés). His approach and storytelling remain fresh throughout, despite the fact they are over fifty years old.

Childhood’s End was derived from his earlier short story, The Guardian Angel (1946), and in some ways the whole book reads more like a collection of connected short stories and novellas than it does like a single novel. Even so, it holds together as a single narrative and keeps the reader enthralled throughout.

The book also includes a number of what are now considered Science Fiction no-no’s, particularly its frequent use of Info-dumps and one or two sequences that border on “as-you-know-Bobs.” Yet Clark delivers even his most technophillic info-dumps with a skill that keeps you tightly bound inside the story, rather than pulling you out of it.

In the end, the only reason I gave this book a Beta rating instead of an Alpha is that those of you who actively dislike Science Fiction novels will not enjoy this. It is a dated piece and as such may not appeal to some. To anyone else, however, it is a must read.

Notes about the Audio Edition: Brilliance Audio did a wonderful job with this audiobook. Perfectly produced, no obtrusive music or sound effects, and most importantly, a brilliant voice talent to bring it to life. Eric Michael Summerer narrates this volume with brilliant sophistication that adds to the novel. His change of voice between characters is subtle, but there is never a doubt in my mind as to whom was speaking, and he kept the perfect levels of tension in each scene without once allowing himself to intrude on the text. He get’s a Five-out-of-Five for his skill and talent. Including in this audiobook is an introduction delivered by the award winning author Robert J. Sawyer. In it, describes the place Childhood’s End holds both in the world of Science Fiction, and in the bibliography of the late great Arthur C. Clark. While in some ways such an introduction is not necessary, in others it always helps to have such a piece when reading a book that is now a classic. All in all, this audiobook did complete justice to a classic of the genre.

I'm a writer of mysteries, espionage, and speculative fiction. In my previous incarnation I was an archaeologist specializing in gender and identity in Iron and Bronze Age Europe. Mostly, however, I was known for my works with the use of geomatics, multiscalular spatial analysis and landscape theory within archaeology.
View all posts by Thomas Evans →
This entry was posted in Identity, Near Future fic, Science Fiction, Stand Alone Novel, Thoughtful and tagged Art, arthur c clark, Arthur C. Clarke, Arts, Childhood's End, reading, Robert J. Sawyer, Science Fiction, Soviet Union, United States. Bookmark the permalink.