Grade: Δ — Solid read, but only buy it if you like the genre. 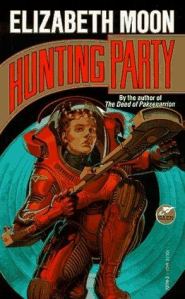 The first book in the Serrano Legacy Series is a mindless but enjoyable read for anyone who likes Military Science Fiction, and may appeal to others whose tastes don’t normally run in the MilFic direction.  It follows the story of Heris Serrano, a commander in the Regular Space Service, who is forced to resign under less than ideal circumstances. Desperate, she takes the post as Captain on the private yacht of a member of the aristocracy. Personal conflicts between captain, owner, crew and passengers begin to stew, but are soon put in perspective as Heris and the others are drawn into real threats tied to the disgraced Captain’s past.

Far Future hegemony where the military is divided by social status.

This book may not technically qualify as Military Science Fiction, as that its principal character is not in the military (anymore at least), nor does any of the action take place within a military theater of action.  Since, however, it deals with a former military commander‘s adaptation to civilian life, her attempts to put military protocols in place on a rich old woman’s yacht and has a good deal of military style combat in it, I feel safe in stretching the definitions.  Regardless it is an action piece, with lots of chases and tense combat scenes.

I did enjoy these action bits and particularly life-on-board-ship elements, but on the whole, I can’t say this was the best read I’ve picked up.  Oh, it was fun enough that I read the sequels, and if you like MilFic, I’d say it’s well worth the read, but in some senses it failed to capture my interest in the way that say, Honor Harrington or the StarFist books did.

Part of this had to do with the resolution of the subplots.  Moon did an excellent job of setting up a good antagonistic relationship between Heris and her employer from the outset.  Both Heris and Lady Cecelia (the wealthy aristocratic owner of the yacht) were solid female characters at odds with one another and with valid points of view.  This could have been developed into a long and interesting relationship that would have served as a very realistic and enjoyable backbone to the series.  Instead, in what appears to be the mistaken concept that reasonable people will always find a reasonable solution reasonably easily, Moon decided to relieve the tension of this relationship quite quickly within the first book. While this does set up a strong friend-and-mentor relationship for the rest of the series, I cannot help but feel that the series could have been much stronger with the more complicated relationship that initiated this book.